Back to People in Parliament

Canada is a constitutional monarchy. The Monarch (the King or Queen) is the Head of State, whose powers are defined by the Constitution and constitutional conventions. These responsibilities are carried out by the Governor General (the Monarch’s representative in Canada).

The Monarchy in Canada

The Monarch’s powers and responsibilities are established and limited by the Canadian Constitution and several other laws.

Canada shares its Monarch with several other Commonwealth nations such as Australia, India and the United Kingdom. The Monarch’s role within each country is unique and independent from the others.


Head of State vs. Head of Government

In some countries, such as the United States and Mexico, the Head of State and the Head of Government are the same person.

In Canada, the Head of State has important constitutional responsibilities but no political role. They are strictly non-partisan (not affiliated with any political party or platform).

The Head of Government is a political figure who leads Cabinet.

The Role of the Governor General

The Governor General performs the position’s constitutional responsibilities in a non-partisan way, guided by the Constitution, by convention and by the advice of the Prime Minister. 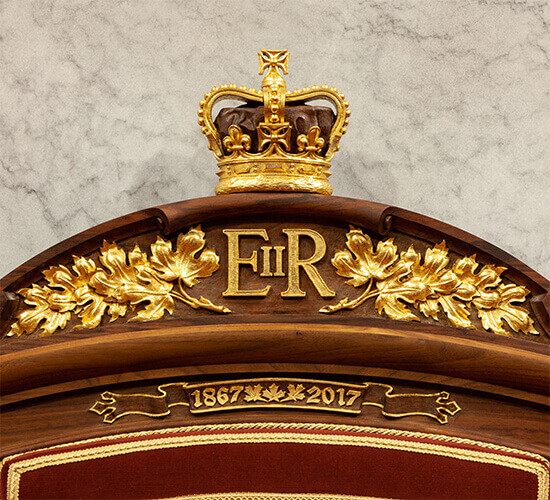 The Governor General travels widely to encourage and acknowledge individuals and groups who have made substantial contributions to Canada. They also present honours and awards to people who have demonstrated excellence.

As Commander-in-Chief of Canada, the Governor General plays an important role in recognizing the contribution of the Canadian Armed Forces and their families. The Governor General visits Canadian military members posted overseas, attends ceremonies for fallen members and honours veterans on Remembrance Day.

The Governor General welcomes visiting heads of state and other important visitors to Canada. They also accept the credentials (official documents) of new ambassadors and high commissioners who represent their respective countries in Canada. During state visits abroad, they lead delegations and meet with other prominent officials to promote Canada on the international stage.

The Governor General is also the head of the Canadian Heraldic Authority, which grants coats of arms and other heraldic emblems to Canadian individuals and organizations.

Reserved Powers of the Monarch

The Governor General exercises all the powers and responsibilities of the Monarch, except for some that can only be performed directly by the Monarch, including the following:

In the House of Commons Chamber, members of Parliament and other parliamentary officials do their part to support the democratic process and ensure that each...

In the Senate Chamber, senators and other parliamentary officials do their part to support the Senate’s work. Symbols and objects in the chamber at the Senate...

Canada’s senators are appointed by the Governor General on the advice of the Prime Minister. They represent Canada’s provinces and territories in Parliament...

The Speaker of the House of Commons interprets and applies the rules and traditions of the House and ensures the orderly conduct of its business. The Speaker...

The Speaker of the Senate interprets and applies the rules and traditions of the Senate, presides over the daily chamber proceedings, and takes care of diplomatic...