An important part of the work of Parliament is done in committees. In these groups, parliamentarians examine proposals for new laws in detail, study issues, consult with experts, and listen to Canadians to inform their decisions and recommendations.

The Work of Committees

Parliamentary committees meet to gather input from many sources and discuss issues in depth. This allows Canadians to participate in the legislative process and helps parliamentarians consider bills (proposed laws), study issues and review policies with as much information as possible.

Committee roles and responsibilities include:

Committees are designed to be smaller-scale versions of the Senate and the House of Commons. This format allows parliamentarians to discuss proposed laws and study important issues while maintaining representation ratios similar to those seen in the chambers. For example, a political party or group with 20% of the seats in the chamber will hold roughly 20% of the seats on a given committee. Similarly, a majority government will hold a majority of seats in a House of Commons committee.

At the beginning of each session of Parliament, both the Senate and the House of Commons create selection committees to choose which parliamentarians will be members of each committee. Substitutions may be made over the course of a session. All officially recognized parties and groups (a group or party with at least nine seats in the Senate or 12 seats in the House of Commons) are represented in the committees. Parliamentarians can work on several committees.

Committees mirror the layout of the Chamber

Most committees have similar room layouts and representation ratios to those seen in the Senate and House of Commons chambers.

Hover over the roles to highlight the seats

There are five main types of committees in Parliament. Each one has a different purpose, mandate and membership.

Standing committees are permanent committees that oversee the work of government departments, review federal policies, investigate issues and study bills assigned to them by the Senate or the House of Commons.

Each standing committee has its own areas of study, such as:

Most standing committees have between 12 and 15 members.

Legislative committees study specific bills. These are more common in the House of Commons than the Senate.

A committee of the whole comprises all members of the House of Commons or all members of the Senate. This large committee may be used when a quick decision or discussion is necessary, since it allows all the parliamentarians from one chamber to participate at the same time. 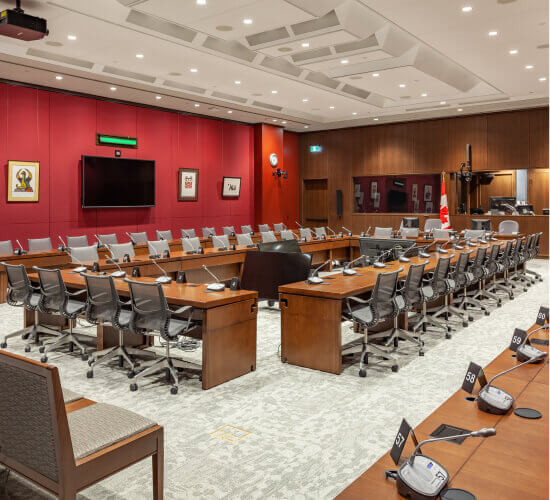 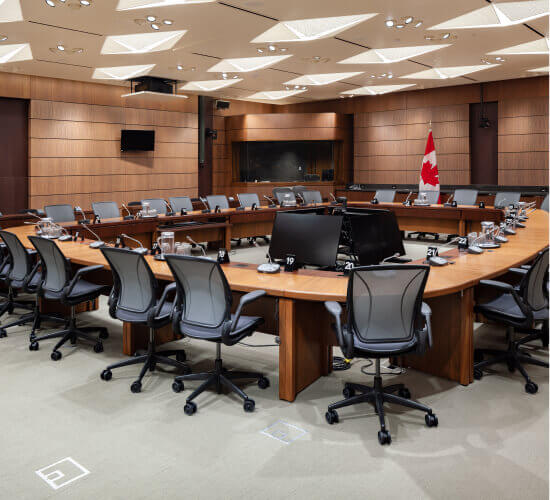 Key Roles in a Committee

Aside from the contributions of committee members, several roles support the committee’s work.

The clerk of the committee is a non-partisan (politically neutral) Senate or House of Commons employee with expertise on rules and procedures. The clerk is the chief procedural, administrative and information officer for the committee. The clerk drafts the minutes, which serve as the official record of a meeting.

Analysts are non-partisan Library of Parliament employees who support the work of committees by researching topics on request. Analysts support parliamentarians during committee meetings and help answer questions. They also write papers and briefing notes and draft reports about topics the committee discusses.

Members of the public can participate in committees’ work by submitting a brief or by requesting to appear before most committees. When choosing witnesses, committee members try to select people who have diverse identities, as well as positions and perspectives across the political, social and cultural spectrums. The public can also watch most committee meetings in person or online.

Public meetings are open to visitors and transcripts of the discussions are published. Broadcasting and videoconferencing allow those in remote areas of the country to participate and observe.

In-camera meetings are not open to the public. These meetings are usually held when the committee is considering administrative matters, when it is drafting a report, or when it is dealing with sensitive topics, such as national security.